Looking for a sleek showcase design to display his collection of diecast models, this Auckland-based collector came upon Creative Displays. The private collector liked the classy look and slim design of the custom glass display cases with their unobtrusive frames, so he reached out to the sales team. He was pleasantly surprised by the flexibility and options that Creative Displays offers. 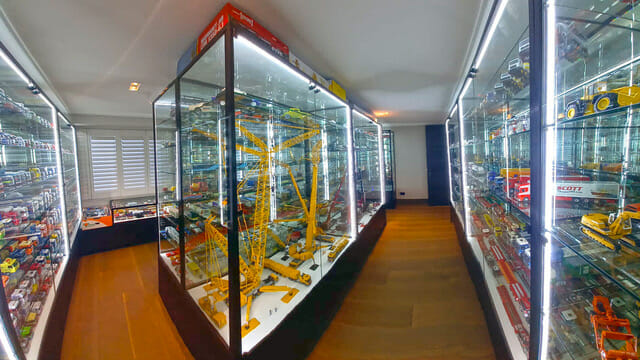 The project called for some very particular design elements to best show-off the collector’s items, make the most use of the space in the collector’s home, and prevent deterioration of the diecast models. The design needed to include specific shelf spacing in each of the shelving units, while maintaining a sleek finish that would not obstruct the view of the models. The collector also had specific design elements in mind for his displays such as having all componentry like hinges and door locks in a black finish to fit with the design aesthetic of his home.

To create the flawless displays, the design team was in close communication with the client throughout the entire process. Creative Displays drew on previous experience and the use of bespoke processes and technology that they have developed over many years. To meet the collector’s design requirements mirrored backs were only used on units that would be placed against walls to create the illusion of more space and powdercoating was added to compontenentry in house. Plastic co-extrusions (a plastic clip-in piece that runs around the frame with a soft rubber flap) were included to prevent dust accumulation, as were Creative Displays’ unique pivot hinges to further help mitigate deterioration. These hinges create a seal when closed and have a frame that is 30% narrower than competitors’. The end result of the narrow frames, according to Creative Displays’ CEO Rob Tollenar, is that, “it gives you a lot more visibility looking in [the display], and it looks less industrial than others on the market.”

Taking customisation to the next level, the Creative Displays team went out of their way to satisfy the collector’s desire to have as much of the case black as possible - to do so, even the locks were custom-coated black. And with so many possible lighting options the collector was able to have all the details match his vision, ultimately going with illuminated surround LED’s.

The resulting cabinets are perfect for displaying the client’s selection of diecast models with all the sleek, and detailed, design elements that he was looking for. They are the result of a team that is constantly innovating and uses a collaborative design approach to ensure a great outcome for their customer at the end of the day.